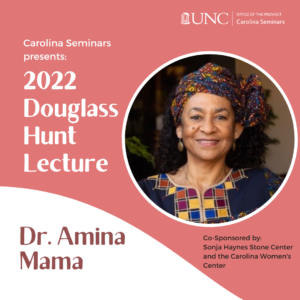 What are the possibilities for transnational
feminist solidarity, in the context of the
deepening North-South inequalities
exposed by the global climate crisis, border
controls, and responses to the COVID-19
pandemic? Dr. Mama discussed how Africa’s postcolonial states continue to exhibit profound contradictions in the arena of gender politics. While women’s movements have successfully pursued a great many legal and policy reforms, the implementation of new laws and policies remains very challenging, as state structures often lack the will and the capacity, or worse, work to appropriate and subvert real change. Yet feminism continues to spread on the continent, constituting an intellectual and political force for freedom that challenges the ongoing exploitation and oppression of women on a variety of fronts. In previous work, Dr. Mama addressed the contribution of feminist women to the theory and practice of women’s movements. In this lecture, she presented some examples of bridging strategies that seek to push the frontier of change through new activist research collaborations. Today’s academic publishing reiterates Western hegemony in feminist knowledge production, even in the field of African studies.

Dr. Amina Mama is a widely published and traveled Nigerian/British feminist activist, researcher, and scholar, as our keynote speaker. She holds a Doctor of Philosophy in Occupational & Applied Psychology from Birkbeck, College, University of London, a Master of Science in Social Psychology, London School of Economics and Political Science, University of London, and a Bachelor of Science (with Honours) in Psychology from University of St. Andrews, Scotland. She spent 10 years (1999-2009) leading the establishment of the University of Cape Town’s African Gender Institute as a continental resource dedicated to developing transformative scholarship and bringing feminist theory and activism together.

2019: Slaying the Gerrymander: Inside the battle to take back democracy

Speaker David Daley discussed how Republicans reinvented and weaponized the gerrymander during the 2010 election, then took advantage of big data and sophisticated mapping technology to draw themselves nearly unbeatable district lines for congress and state legislatures nationwide. Using state by state examples, including North Carolina, Michigan, Wisconsin and Florida Daley demonstrated how they pulled this off, how Democrats fell asleep, and what the consequences have been for public policy and political polarization during this era. He also pivoted to the response to this rigging of our elections: A citizen movement centered around fair maps and voting rights that scored historic victories during the 2018 election, including in red states like Utah, Missouri and Ohio. On the verge of the 2020 election and the next decade of redistricting, with gerrymandering back at the Supreme Court — including one case from North Carolina — where does the fight for fair maps stand?

David Daley is the author of the national best-seller “Ratf**ked: Why Your Vote Doesn’t Count” and the forthcoming “Unrigged: How Americans Fought Back, Slayed The Gerrymander, and Reinvented Democracy” (both W.W. Norton). His journalism on democracy and voting rights has appeared in the New Yorker, the Atlantic, Slate, the Washington Post, Los Angeles Times and many other leading publications. He is a senior fellow at FairVote, an Institute for the Liberal Arts fellow at Boston College, and the former editor in chief of Salon. He earned his B.A. in political science at Boston College and his M.A. in journalism from the University of North Carolina at Chapel Hill.

Co-sponsored by:
English and Comparative Literature
Institute for the Arts & Humanities
Public Policy
School of Media and Journalism
Sociology

2005: Stephen Murray – Professor of Art and Archaeology at Columbia University

2000: Russian classical pianists (in collaboration with the Music Department and Newman Series)